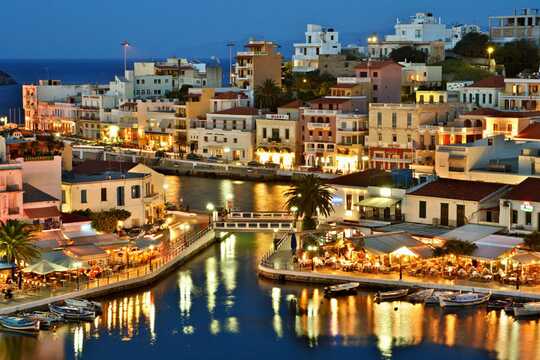 Agios Nikolaos- 'Agios' to Cretan islanders, or 'Ag Nik' to the many English-speaking visitors- is a beautiful harbour town in eastern Crete, overlooking the peaceful Mirabello Bay and the 'bottomless' Lake Voulismeni. This is undoubtedly one of most delightful destinations for Crete holidays, a charming, upmarket town in a stunning location.

Agios Nikolaos is easy to get to from the UK, by direct flights into Heraklion followed by a short car or bus journey. On the Beach has loads of fantastic Crete holiday deals, so book now for an idyllic Greek holiday.

Almiros Sand Suites by the Beach

The Sand Suites - Adults Only

Like the rest of Crete, Agios Nikolaos enjoys hot, dry summers and mild winters. July to August is the most popular time to visit; temperatures at this time of year range from 30° Celsius during the day to 22° Celsius at night.

Spring and autumn are cooler, and are great times in their own ways. There is rarely any rain during the summer months, but showers can be expected during the mild, grey winter.

Beautiful Agios Nikolaos is situated in an arresting location, with great views over Mirabello Bay, and Lake Voulismeni at its centre. Although bottomless according to legend, the lake is actually 64m deep. While the town itself doesn't have a significant beach, the nearby coast is easy to reach and there are many nice bays to visit. Agios Nikolaos is a great base for exploring the east of Crete, and during the summer boat trips run to the neighbouring islands and around the bay.

Things To Do on Agios Nikolaos Holidays

Agios Nikolaos is an attractive town huddled on a hilly peninsula, overlooking both a central lake and a harbour on the Cretan Sea. Around the lake are many small shops to explore, and a Folk Museum that holds a lovely collection of artefacts from the island. The town is also home to The Archaeological Museum, which boasts a treasure trove of relics from the Minoan era. The tiny 10th Century church of Agios Nikolaos perches on a hilltop above the town. It's a trek up the steep slopes to reach it, but the pretty church is worth it, as are the views out over the bay.

Agios Nikolaos was the harbour of the ancient city of Lato. The relics on show today in The Archaeological Museum bear witness to the area's importance to the Minoan civilization. During Roman and Byzantine rule the city dwindled and was eventually abandoned, until the Venetians constructed a fortress and named the bay Mirabello - 'Beautiful View'.

The town was gradually revived, and in the early 20th Century, with the creation of the Greek state, became the capital of Laisithi province. In the 21st Century Agios Nikolaos is firmly established as one of the more superior centres of Cretan tourism.

Agios Nikolaos has plenty of good eateries, such as Du Lac, a classy lakeside restaurant serving great fresh seafood. More modest, but no less delicious, cuisine can be found in some of the tavernas tucked away in side streets, such as Sirri's, located on Kyprou, where you can get a great Cretan Souvlaki.

The town hosts 'The Lato', a cultural festival throughout summer, featuring traditional and contemporary music and dance from Crete and Greece, and much, much more.

The harbour, lake and nearby coast have a wealth of restaurants, cafes and bars, lending Agios Nikolaos its lively, cosmopolitan-style nightlife, with something to suit all tastes. If you're looking for a relaxed evening traditional fare with the locals you could try the old-fashioned Asteria Café. If you prefer a long night of music and dancing, clubs such as Lotus and Santa Maria stay open into the early hours. Most of the bars and clubs are centred round the lake area, so it's all easy to find.

While there is plenty to do after dark in Agios Nikolaos, many people make the short trip to nearby Elounda for a change of pace.

On the Beach has great deals on flights to Crete and hotels in Agios Nikolaos, so book now, the perfect Greek holiday awaits you! Using On The Beach lets you totally customise that next holiday within minutes, so don't delay!