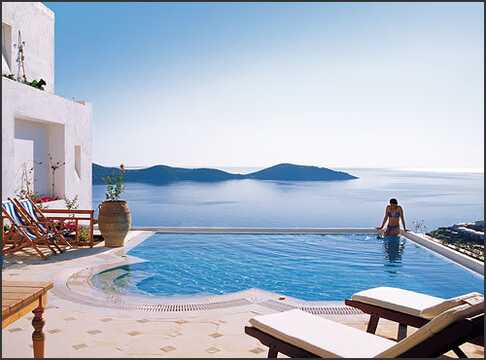 Elounda is a beautiful resort situated in Crete's northeast, on the coast of Mirabello Bay. Approaching the village by road from Agios Nikolaos you are treated to spectacular views out across the bay and mountainous panoramas back inland. Upon arriving you will discover why Elounda is one of the island's favourite and most exclusive resorts. The village was built near the site of the ancient city of Olous, and these days is well developed for tourists' needs with a fine selection of quality hotels in Elounda.

The area around Elounda is stunningly beautiful, with many great beaches, a peaceful lagoon, crystal clear water and the rocky islet of Spinalonga out in the bay. On the Beach has outstanding deals on Crete holidays, so book now for your break in the sun!

There are excellent beaches all around Elounda, including a nice sandy town beach that stretches away northwards from the centre. In this direction a series of good swimming spots can be found, such as the popular Driros Beach, where you can enjoy a range of water sports. Many sheltered coves and sandy beaches are dotted around the Spinalonga peninsula, and slightly further north is the small hamlet of Plaka. In the village there a couple of great tavernas, and the beach is incredibly tranquil, a pleasant retreat away from the bustle of the larger resorts.

The nightlife in Elounda is quiet and relaxed compared to other Greek resorts, centred around the cafe terraces and cocktail bars. Along the seafront there are some particularly excellent restaurants serving classy seafood. Away from the centre, along the coast and inland, are many tavernas and cafes offering less expensive, but still very enticing, fare.

The are plenty of places to go for a drink, with contemporary and traditional music to listen to, but if you're in the mood for large clubs and dancing all night your best bet is to head into Agios Nikolaos. Elounda is ideal, however, for those wanting a refined, peaceful evening.

Elounda enjoys an exceptional climate with very hot summers; the popular holiday months from June to September can see temperatures reaching 40° Celsius. Sheltered in Mirabello Bay, the water here is great for swimming and is pleasantly warm right through to October.

Spring is very pretty with bursts of wild flowers along the coast, and autumn is tranquil as the resorts wind down. The winter here is reasonably mild, but there can be periods of cold weather and rain.

Things To Do on Elounda Holidays

Blessed with alluring sandy beaches, Elounda has many other attractions to offer. In the centre of the town is a large seafront square with many cafes, restaurants and shops. To the east of the town the Spinalonga peninsula stretches away, separated from the mainland by a French-built canal. This was the site of the ancient Roman-Greco city Olous, which boasted temples of Zeus and Artemis, but was lost to the sea. Structural remains are still just visible under the waves.

North of the peninsula is the small island of Spinalonga. Boat trips run regularly from Elounda so you can visit the deserted fortress and a small museum that outlines the island's history. Inland, near the village of Fourni, is a cottage industry museum, and the church at the mountain village of Dories holds the island's oldest icon of the Virgin Mary, which dates from the fourteenth century.

Elounda has a history that stretches back into antiquity. The ancient city of Olous was an important harbour, but fell into the sea towards the end of the Ancient Greek period. During the sixteenth century the Venetians constructed a mighty fortress on Spinalonga. Despite repeated attacks from the Turks the defences were never breached.

During the first half of the twentieth century the island was home to Europe's last leper colony, which closed in the mid 1950s. Today Elounda is enjoying a period of peace and stability, and is firmly established as a popular and attractive holiday destination.

The central celebration in Crete's religious calendar is Holy Week, and festivals take place in Elounda and the neighbouring villages. During October Elounda hosts the Free Fish Night and various cultural events are held during the summer months. The nearby city of Agios Nikolaos holds a big festival each year on December 6th, well worth the short journey if you are in Elounda during the winter.

Elounda is the self-proclaimed most luxurious resort in Greece, with some of the country's finest hotels and beaches. On The Deal has amazing offers on flights and the best rooms, so book now for an idyllic Crete holiday!