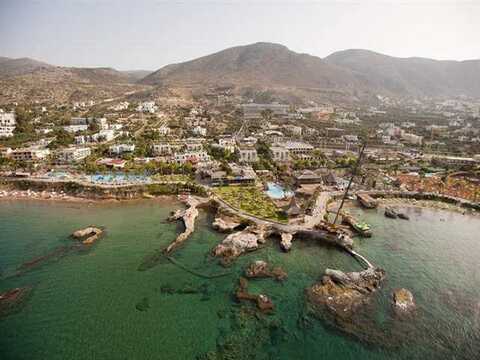 On Crete's north coast, set between mountains and sea, is the cosmopolitan resort of Hersonissos. In antiquity Hersonissos was a prosperous merchant harbour and today is one of the most popular spots for people on Crete holidays. This is a great beach resort, fully developed to cater for all your needs, and boasts many vibrant bars and clubs. Along with its famous nightlife the town has plenty more to offer, is great for families, and has attractions for all tastes.

The resort is located to the west of Heraklion, and has good transport connections with the capital and the island's main airport, so is very convenient to reach from the UK. On the Beach has great deals on flights and offers a choice of the best rooms in town, so book now for a perfect holiday in the sun!

Hersonissos enjoys a beautiful temperate Mediterranean climate, with long, hot summers. June to September is the warmest time of the year, most popular, and best time for getting on the beach. August can bring seasonal northerly winds, but this is also the hottest month and the refreshing breeze is often welcomed.

Spring is a lovely time to visit, with bursts of wild flowers and fresher weather. Autumn is also pleasant as the resort begins to wind down after the peak summer month crowds fade away. Only in the winter does the weather become less idyllic with occasional rain showers and overcast days. Even in the depths of winter the weather in Crete is still better than in the UK!

As one of Crete's most developed and popular resorts, it will come as no surprise that the landscape of Hersonissos is dominated by sun, sea, and stunning beaches with a series of sandy stretches lie to the west of the resort's centre. Most of beaches are served with good swimming and sunbathing facilities, and several of the more sheltered bays offer water sports. Some of these spots get very busy at peak times, but for a quieter time visit Stalis, a smaller, family-orientated resort just down the coast to the east.

At Hersonissos' waterfront you can still see remains of the Roman harbour, which is now mostly submerged. The headland above the present-day harbour is a popular spot to watch romantic sunsets over the Cretan Sea.

Things To Do on Hersonissos Holidays

Hersonissos is an extremely attractive resort, especially for those who want plenty of activities, great tourist facilities and a lively nightlife. The sandy beaches are complemented by the Aqua Splash Water Park, which has slides, pools and waterfalls, a perfect place for adults to cool off and great fun for kids. Boat trips from the harbour run to the beaches at Sissi and Dia, excellent ways to spend a day out.

To discover the area's history you should head to the two museums in nearby Hersonissos. The Museum of Rural Life is built in a former olive oil mill and explains traditional farming. The Cretan Open-Air Museum, 'Lychnostatis', is one of the island's more unusual attractions, a recreation of village life with a windmill, stone house, gallery and functioning bar that gives you a glimpse back into the past.

To the east of the town is the Crete Golf Club, the island's first club, with 18 holes and great vistas. Inland from Hersonissos, away from the bustle of the resort, is remarkably different, with three traditional villages to explore: 'Old' Hersonissos, Koutouloufari and Piskopiano. These villages are now becoming rather developed, but are still attractive and offer an intriguing glimpse into Crete's more hidden history.

Hersonissos originates from Minoan times, and was an important port during the Classical and early Byzantine eras. In the Roman era, when the city flourished, ornate marble fountains were constructed, remains of which can be seen at the harbour. Above the harbour the headland area of Kastri excavations have revealed other Roman remains and an early Christian basilica.

After the city declined Hersonissos village existed as a small fishing community, until the late twentieth-century when travellers discovered its many delights. The town, like the rest of Crete, has a diverse and often turbulent history, but today is a friendly and cosmopolitan holiday resort.

The central celebration in Crete's religious calendar is Holy Week, and the villages around Hersonissos have their own customs to mark this time of year. During July the town hosts two events: a three-day music festival with traditional and contemporary music, and the special Hersonissos Watermelon Festival.

Hersonissos has a veritable feast of eateries from top-notch seafood restaurants, traditional tavernas, to cheap cafes. Along the bustling seafront there are many places to enjoy a meal in the evening. For a more peaceful alternative you could dine at one of the restaurants that line the square in Old Hersonissos. Don't forget that most of the hotels in Hersonissos will also offer a full schedule of family-friendly entertainment in the evenings.

Hersonissos really comes into its own after dark, with a pulsating party atmosphere. The town centre is crammed with bars and clubs, with most of the action based around the main Beach Road. If you are looking for a venue where you can dance until dawn you are spoilt for choice. If you would prefer chilling out in the evening the Creta Maris Hotel hosts an outdoor cinema, or you could head out for a relaxing evening in Gouves.

Hersonissos is a wonderfully cosmopolitan resort with fantastic beaches, a lively nightlife, great family-friendly atmosphere and fascinating past to discover. On the Beach has the best deals on Crete holidays to make life simple for you, so book now for a perfect Hersonissos holiday!