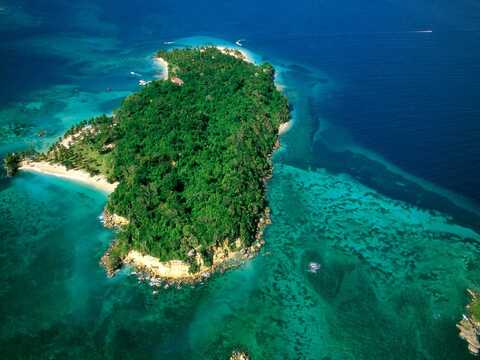 The Samana peninsula on the Dominican Republic's north easterly coast is often referred to as the 'real Caribbean', and it's easy to see why. Breathtakingly white sands great you on holidays in Samana, sparkling turquoise waters and a luscious green back drop fulfill the Caribbean's aesthetic criteria, but it's the air of tranquillity which tourists seem to come back for year upon year. The atmosphere of calm is the perfect way to enjoy the soothing Dominican sun, and the seemingly endless stretches of beach mean if you want to put your feet up and forget about the stress of home. If this sounds like your idea of a proper break then a Samana holiday is the thing for you!

Weather on the peninsula is as you would expect with the Caribbean: sun, sun and more sun! Temperatures reach into the thirties all year round, meaning not only is Samana a great place to top up your tan, but you can do it in winter as well! So pack your sun cream and book your holiday in Samana today: you won't find a better alternative to the dull British winter!

Holidays in Samana are all about the beaches, but they themselves could never be described as 'normal.' There's a wide selection for you to choose from, such as Cozon, Las Terrenas, El Portillo and Playa Popy, and all offer their own something different: some are great for kids because of their still waters, whereas others boast coves and cliffs ideal for caving expeditions.

Mountain biking is a great way to explain some of the less tamed areas of the landscape, and there are a number of boat expeditions which allow you to explore in a different way, whether it be in your trunks or a wetsuit!

Things To Do on Samana Holidays

Holidays in Samana are great for the whole family, and are a great way to completely unwind. The beaches which dominate the peninsula's coast are ideal for relaxation, and the clear, tranquil waters are perfect for swimming and snorkeling. For those looking for a little more excitement, mountain biking and horseback riding are two very popular ways to explore the local environment.

Samana will also keep the photographers amongst you, with some of the greatest whale watching in the world available between January and March, as well as the breathtakingly picturesque El Limon waterfall which is just a short journey away. Both Samana City and Las Tarrenas town are worth a visit, in particular Samana City, which still has a surprising number of good English speakers due to its American heritage.

Hispaniola, the island which the Dominican Republic shares with Haiti, was originally controlled by the Tainio Indians before the arrival of Christopher Columbus in 1492, and Spanish occupation began a year later. In fact, the Dominican Republic didn't actually gain independence until 1884 after having been sold to the United States for one million pesos. Samana City itself is a different story, as it was settled by a group of freed American slaves in 1842, their influence, particularly the language, still prominent today.

The influence of the 'Americanos' stretches further than the language however. If your holiday in Samana falls between August and October, then you will see the Dominicans come alive as this is their period of harvest festival, dating back to the West African traditions on the slave settlers. Bright colours, loud music and a lot of dancing means this is one of the most entertaining ways to see the locals at their authentic best.

For a more relaxed Samana holiday experience, look for the previously recommended locally owned bars and clubs, where jazz and 'merengue' are particularly popular, or the restaurants where the locally caught seafood always tops the menu.

Samana is one of the quieter resorts in the Dominican Republic, so may not be the place for those of you looking for a non stop party atmosphere. Nightclubs are scarce, but often the hotels and resorts themselves provide the best entertainment for their guests. For a more authentic experience on holiday to Samana, the quieter, locally owned bars and restaurants are a great way to see the Dominican's relaxing as well as trying some local cuisine.

Samana holidays really are a great way to relax with the luxuries of the Caribbean close at hand. The white sands and azure waters are only made more attractive by the glorious climate, and the welcoming locals will make you feel right at home. So get your passport at the ready: our Samana deals are the best around, and booking early will only save you more! For Dominican Republic holidays, On The Beach is the place to be!