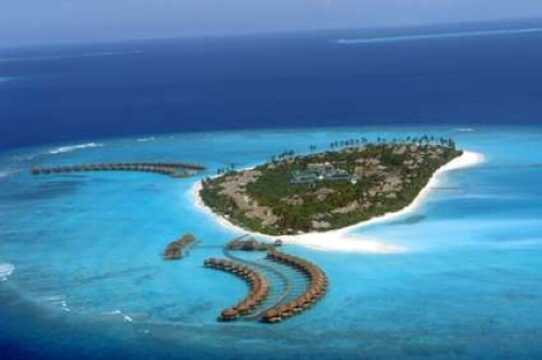 Male is the capital of the Maldives, an island city that is densely settled yet clean, friendly, and full of charm. There's plenty to explore on this little island, and Male holidays also provide easy access to the rest of the Maldives, including some absolutely fantastic diving and surfing sites, and an abundance of beautiful marine life. On The Beach has the best deals on flights and accommodation for cheap all inclusive holidays in Male, making you time in paradise as convenient as possible.

RamadanPlease be aware that the Islamic holy month of Ramadan will take place between 12/04/2021 and 11/05/2021. During this time, many cafes and restaurants will close during the day, restrictions on alcohol sales may be in place, and hotel dining for non-Muslim guests may take place in private rooms. Playing music, dancing, and eating in public areas may also be restricted during this time.

Male has a glorious tropical climate with plenty of sunshine, blue skies and daytime temperatures around 30° Celsius throughout the year. The temperatures drop to around 25° Celsius at night, and the seawater remains at 27° Celsius most of the time. There are almost constant sea breezes that make conditions ideal for spending time on the beach.

The main variation in Male's weather is the increased rainfall and winds during the April to October southwest monsoon season, particularly in June, July, and August. December to March is the most popular time for Maldives holidays, when the climate is especially fine and dry.

Male is the island capital of the Maldives, and like the other islands that form the country it is a coral atoll on the peak of an underwater mountain. Male is roughly two kilometres long and one kilometre wide, and almost its entire surface is covered with buildings, roads, and a small number of open spaces. The city is small enough to be explored on foot with most of the sights on the north end, while a newly built artificial beach lays on the east coast. There's a harbour, and the city's airport is situated on an adjacent island.

While Male is one of the world's most densely urbanised islands, it's easy to escape to one the idyllic tropical atolls in the nearby sea. There are over one thousand islands in the Maldives, characterised by palm-fringed, pristine beaches and blue lagoons, and the waters of the Indian Ocean contain a spectacular amount of marine life.

Humans have been living on or visiting Male since 2000 BC. The Maldives are at the crossroads of many Indian Ocean's trade routes, and merchants have been visiting throughout their known history. Sri Lankan settlers arrived in 500 BC, and Arabian travellers brought Islam to Male, with the nation converting to the religion in 1153 AD. Male has been the seat of the Maldives' ruling dynasties since at least the 12th Century.

The Portuguese captured the islands in the 16th Century. Portugal was cruel on the Maldivians, but their rule only lasted until a rebellion led by Bodu Thakurufaanu kicked the occupiers out and restored independence. Thakurufaana become a legendry hero of the Maldives, and you can visit his tomb in the centre of Male.

Most of the public holidays and festivals in Male are based around the Islamic calendar including Ramadan and the Prophet's Birthday. National Day celebrates Thakurufaana and his men overthrowing Portuguese rule; the date varies each year.

Republic Day on November 11th each year is celebrated with brass bands parading through the city. Fisheries Day on December 10th applauds the Maldives' fishing industry.

Male is a small, enigmatic capital city, densely packed a small island. Although nearly every part of the island is covered with buildings and roads, the atmosphere is charmingly small town, and there's plenty to see and do. The Islamic Centre is Male's best-know landmark, its gold dome dominating the skyline in the town centre. The centre has the Maldives's largest mosque, while the nearby Hukuru Miskiiy, the Friday Mosque, is the country's oldest. Built in 1656, the mosque contains superb ornate carvings, but non-Muslims require prior permission to enter. There are over twenty mosques on the island, many of which are constructed from white coral.

Sultan's Park was once part of the grounds of the Sultan's Palace, which has since been demolished and built over. The only remaining part of the palace houses the Maldivian National Museum; the collection is quirky, and perhaps a little patchy, but still well worth a visit.

The Esjehi Gallery is one of the city's oldest buildings, and contains artists' workshops and exhibition space, with the focus on Maldivian arts and crafts. The Guest Shopping Area is Male's commercial zone with plenty of shops selling souvenirs and local handicrafts, and a number of cafes.

One of the principle reasons many people go on Maldives holidays is for the excellent diving and snorkelling. There are some outstanding diving sites within easy reach of the city, including two Protected Marine Areas and the impressive shipwreck of the Maldive Victory.

Male has no bars or nightclubs but the town does have a lively cafe culture at night. There are plenty of places to enjoy an evening meal with many teashops, which serve Maldivian cuisine, and restaurants, which offer European and Asian dishes. The teashops around the port stay open late, and are a great way to experience local life. At the weekends an outdoor stage at the New Harbour hosts performances, and often generates a friendly party atmosphere. No alcohol is served on Male so many ex-pats and tourists head out to the nearby resorts for evening drinks and socialising.

Male holidays offer a fantastic introduction to the paradise islands of the Maldives, and On The Beach has amazing last minute deals for your flights and accommodation, so book now for a perfect cheap holiday in Male.