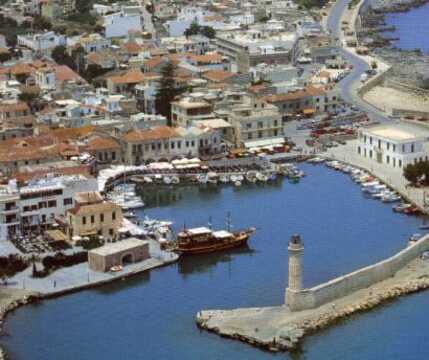 Rethymnon is a vibrant resort town on Crete's north coast, the capital of Rethymnon province. The town enjoys its reputation as the cultural and intellectual capital of the island and boasts some attention grabbing architecture. Highlights include the enormous Venetian fortress, charming harbour and picturesque old town.

Sandy beaches and a wealth of attractions make Rethymnon an idyllic destination. It's easy to get to from the UK, and On the Beach has the best deals on flights and accommodation, so book now for your perfect Crete holidays!

The Syntopia Hotel - Adults Only

Rethymnon enjoys a beautiful Mediterranean climate with long, hot summers and mild winters. June to September are the most popular times to visit because temperatures reach their zenith at 40° Celsius, perfect weather for getting on the beach and topping up your tan.

Spring is also a pleasant time to come on your Crete holidays as the weather is fresh and not too hot, with colourful bursts of wild flowers across the countryside. Autumn is a great to visit because you'll miss all the summer holiday crowds but still have plenty of sunshine and days on the beach.

Rethymnon boasts not only a wealth of culture and architecture, but also fantastic sun-kissed beaches. The town centre faces directly onto a sheltered sandy beach with sunbathing and swimming facilities and calm water. It can get busy here at peak times, but eastwards the beach stretches away for miles with many peaceful spots, and there are lots of water-based activities to enjoy.

Inland from Rethymnon you can explore the foothills of Mount Ida and visit the Monastery of Arkadhi. The monastery is historically important for its part in the 19th Century struggle for independence and is set in a stunning mountainous location.

Things To Do on Rethymnon Holidays

Sitting above the harbour, commanding the skyline is the vast Venetian fortress, which is the largest Venetian fortress ever built in Crete. Constructed in the 1570s to defend against pirate attacks, the fortress contains some interesting architecture within its walls including a church and a mosque. Directly opposite the gates of the Fortesta is the town's Archaeological Museum, which is housed in a converted Turkish bastion. The museum has a collection of Minoan, Greek and Roman finds laid out chronologically.

The Historical and Folk Art Museum occupies a 17th-century Venetian Mansion. On show is a fascinating collection of local crafts, jewellery, pottery and musical instruments. It's a great place for families and demonstrates how life in Rethymnon changed very little from Venetian times until relatively recently. If you're still in the mood to explore then head into the heart of Rethymnon and stroll through the elegant old town, a maze of narrow alleyways with well-preserved Venetian and Ottoman architecture.

Rethymnon was once the Greco-Roman town of Rithymna, and has been occupied since Minoan times. The city prospered in the 16th-century under Venetian rule, and flourished as an intellectual centre. Following Ottoman rule the Russian army briefly occupied the town in 1897, and then in 1913 Rethymnon was unified with Greece along with the rest of Crete. The town maintains its reputation as the island's cultural and intellectual centre, and has also emerged as a highlight for holidaymakers.

Rethymnon has a vibrant cultural calendar. The Renaissance Festival takes place throughout the summer from June to September and offers a wealth of theatre, art exhibitions and concerts mostly at the Erofili amphitheatre within the grounds of the fortress. In the second half of July the town's Municipal Gardens play host to the Rethymnon Wine Festival where you can taste Cretan wines and enjoy traditional folklore and dance displays. The three weeks of Lent are carnival time in Rethymnon culminating with a grand parade through the main streets on Shrove Sunday.

Rethymnon's nightlife has something for everyone, from bustling pubs and bars around the harbour and the streets of the old town, to the relaxed, quieter bars along the beachfront. For a romantic meal you could try one of the tavernas overlooking the Venetian harbour where you will be treated to delicious fresh fish. In the streets behind the inner harbour there is a selection of bars and discos if you fancy loud music and dancing, and the road between the harbour and the town's central square is closed to traffic each night to make way for party goers.

For a change of scenery you could spend the night in the more relaxing resort of Georgioupolis just up the coast or if you fancy a night of dancing then the place to be is Chania, a town that knows how to party!

Rethymnon is a stunning resort with its imposing fortress, charming harbour and elegant old town. There's a wealth of culture and history to discover, and fantastic beaches where you can enjoy the sun and sea. On The Beach has amazing cheap deals on flights and accommodation, so book now for a perfect holiday in picturesque Rethymnon!