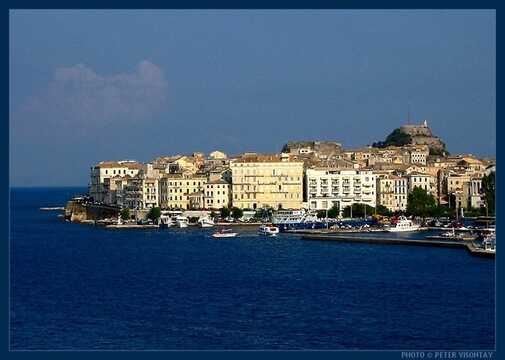 Corfu Town is undoubtedly one of Greece's highlights, the bewitching capital of the emerald Ionian island. Throughout its diverse history various European powers have governed the town, each leaving their mark, and creating a sophisticated, cosmopolitan character. Venetian mansions, French arcades, Byzantine churches, British monuments and even a cricket pitch are amongst Corfu Town's many charms.

Situated on the eastern coast of Corfu, the town is home to the island's main airport and is well connected to the rest of Greece, so is both easy to get from the UK and an excellent base to explore the region. On the Beach has great deals on cheap flights and will find you the best rooms in town, so book now for idyllic Corfu Town holidays!

Corfu Town enjoys a mild Mediterranean climate with gloriously hot summers. June to September is the most popular time to go on Corfu Town holidays, when temperatures soar to 40° Celsius at their peak, but the town is great to visit all year round. Corfu is known as Greece's emerald isle, and during the spring a riot of verdant vegetation is on show.

Autumn is a pleasant time for holidays to Corfu Town as the scent of ripening grapes fills the air and more traditional Greek life returns after the bustle of the high season. Winters are relatively mild but can at times turn grey, wet and a little cold.

Corfu Town is on the island's sublime eastern coast, with Garitsa Bay sweeping away to the south and a patchwork of beach resorts and sandy bays to the north. Many of these beach resorts are well developed with sunbathing, swimming and watersport facilities - everything you need for Corfu Town holidays. The winding, picturesque roads to the north eventually lead to Mount Pantokrator which is the island's highest peak, offering breathtaking views over the island and across the sea to Albania and Italy.

Things To Do on Corfu Town Holidays

A charming blend of European influences gifted Corfu Town a wealth of attractions. The cobbled alleyways and shaded squares of the Old Town evoke the Venetian era, while The Liston parade of cafés were built at the same time, and in the same style, as Paris's Rue de Rivoli. The Liston overlooks the Esplanade park where you can enjoy one the legacies of British rule: a village green complete with a cricket pitch on which matches are still played. The British also built the palace of St Michael and St George, once a Greek royal residency, which today houses the Museum of Asiatic Art. Elsewhere in the town are the Byzantine Museum, Municipal Art Gallery, Archaeological Museum and the Paper Money Museum, all well worth a visit.

The holiest site in Corfu is Agios Spyridon. The church has the highest spire on the island, topped with a distinctive red doom, and contains the remains of its St Spyridon. To the east of the town is the Venetian Old Fortress, guarding over the town's harbour, while to the west is the New Fortress, surrounded by a moat that provides the setting for the town's market.

Corfu Town is steeped in history; the island features strongly in Greek Mythology. Corinthians colonised the island in the 8th Century BC, and during the Roman era it became established as a holiday destination. Corfu was then ruled by a succession of empires: Byzantine; Venetian; French; British during the 19th Century, and finally became part of Greece in 1864.

The architectural mixture of Corfu Town is evidence of this colourful past. The island was occupied by Italy during WW2, but since peace returned Corfu Town has become one of Europe's finest holiday spots.

Corfu Town is home to traditional marching bands, Philarmonikes, who play regular weekend promenade performances throughout the summer and during Holy Week. Over the Easter weekend bands lead processions through the town, culminating in the spectacular ritual of smashing large pots on the streets in anticipation for Jesus' return. The town's Venetian-style Ta Karnavalia during the February carnival season is a highlight, always ending with dancing and partying.

Corfu is famous for its vibrant nightlife, and the town boasts a wide choice of bars and cafes with music and entertainment to suit every taste. There are many great eats centred around the Town Hall square serving cuisine that deliciously displays its many European influences. Most of the big nightclubs are situated out of town, concentrated in the nearby resorts at Kavos, Roda, Ypsos, Gouvia and Dassia where you can dance from dusk 'til dawn.

Corfu Town is one of the finest cities in Greece and all of Europe. Cosmopolitan sophistication meets the natural beauty of the Corfu coast and countryside, making this an idyllic destination. On the Beach has great deals on flights and accommodation, so book now for perfect Corfu Town holidays in the sun!