Spot the Celebrity at Pirates Reloaded in Majorca

The most energetic show in town – Magaluf town, that is – is the famous Pirates Reloaded 18+. A lot more grown-up than the popular, family-friendly Pirates Adventure show, the Pirates Reloaded is the ultimate party night in Magaluf with strictly no kids allowed. Expect unlimited beer and sangria all night as you witness anthems, acrobatics, live DJ sets and sexy performers… 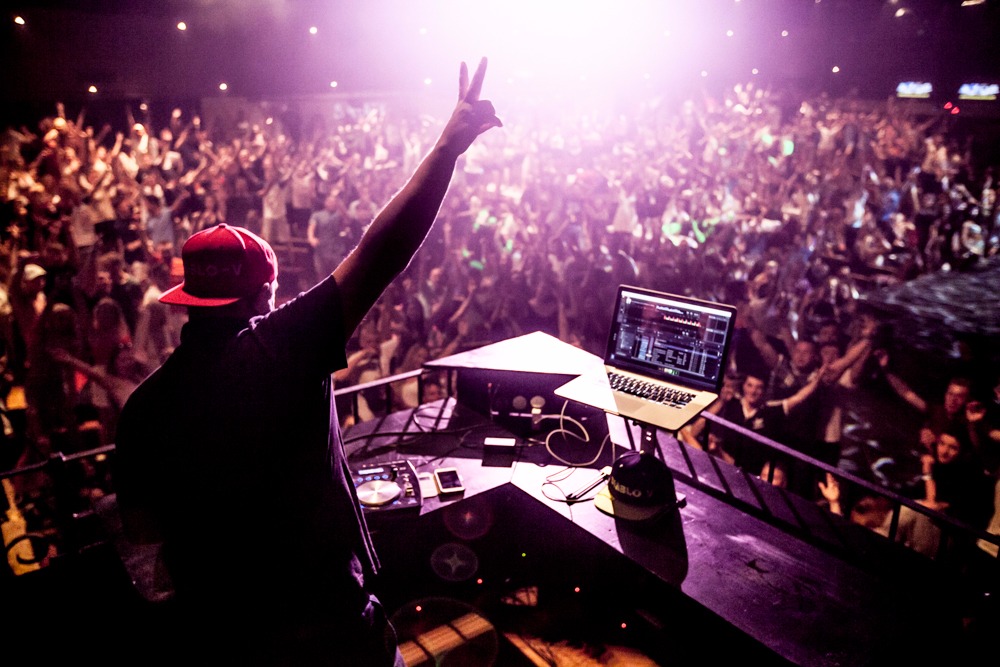 The world-class acrobatics, theatrics and adrenaline isn’t the only thing to gawp at when going to see the Pirates Reloaded show, though… the attraction has drawn a crowd of celebrities over the last few years. It is a must-go show for top Celebs visiting the island.

So, what celebrities have been spotted at Pirates Reloaded 18+? 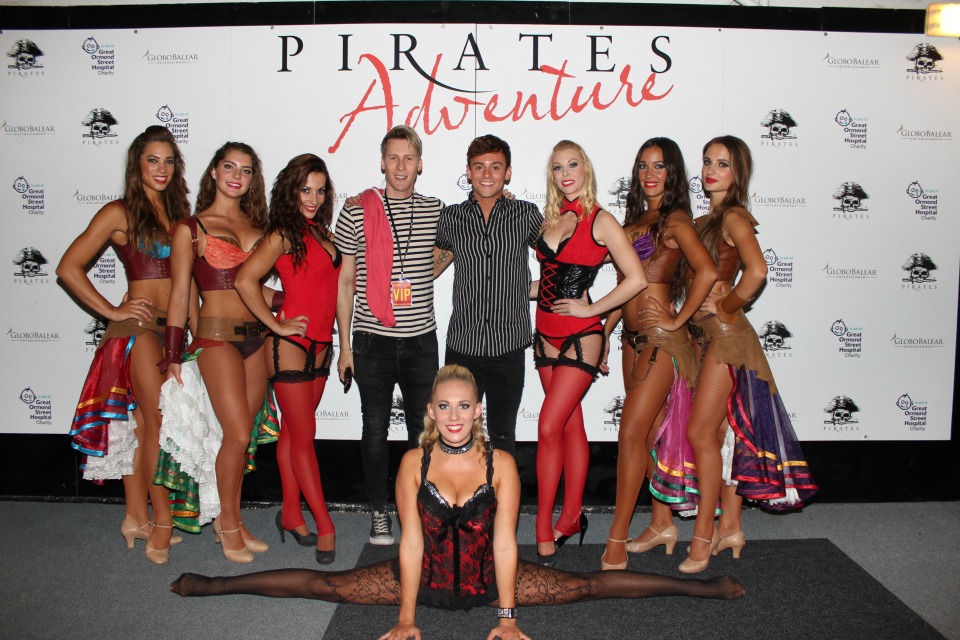 The Olympics isn’t the only place you can catch a glimpse of our very own favourite Olympic diver, Tom Daley. Having recently received Bronze for his latest competition – Men’s Synchronized 10m Platform dive – it seems Tom mixes work and pleasure when it comes to athleticism. Dustin Lance Black won the Best Original Screenplay award at the 81st Oscars Awards in 2009 for the film “MILK”. 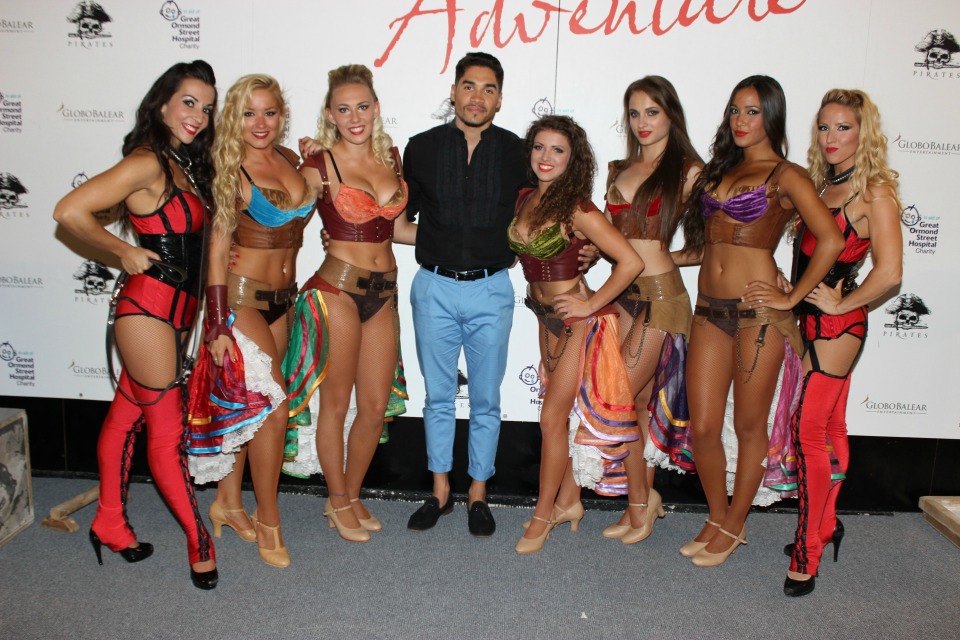 Recently the winner of the silver medal in the Men’s Pommel Horse competition in the Olympics, Louis Smith is continuing to rise into the public eye.  With some of the Pirates in the show of Olympic standard, we bet Louis has a lot in common with the cast. 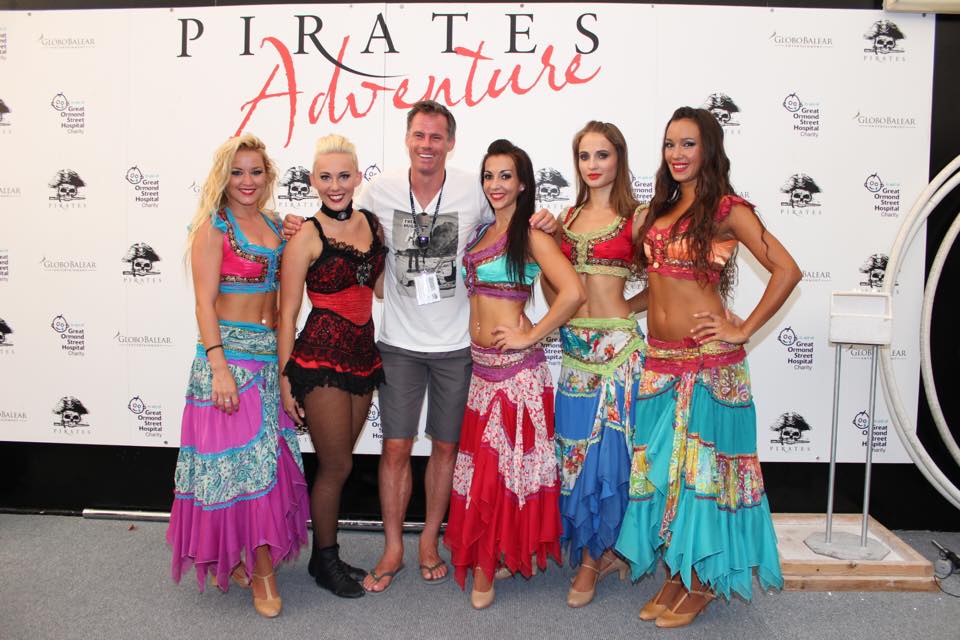 Jamie was formerly a footballer for Liverpool FC where he played defence for 17 years. He also played for England before continuing in front of the screen as a presenter on Match of the Day (he’s the one with the heavy Scouse accent). 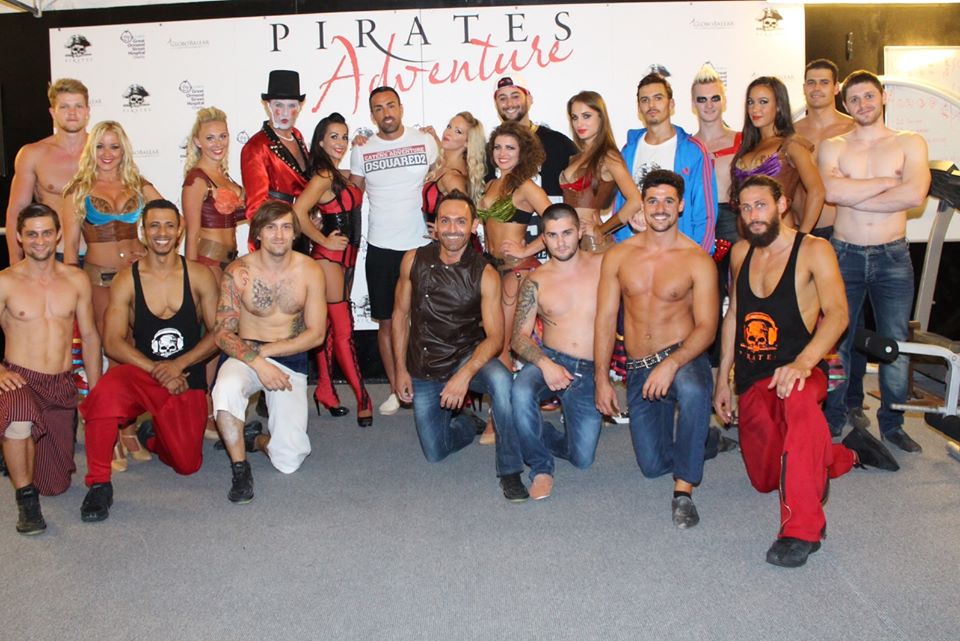 Also a Liverpool footballer for 5 years, Jose Enrique has been spotted at Pirates Adventure. Originally from Spain, he played for his home town in Valencia before switched over to a number of football clubs based in the UK. 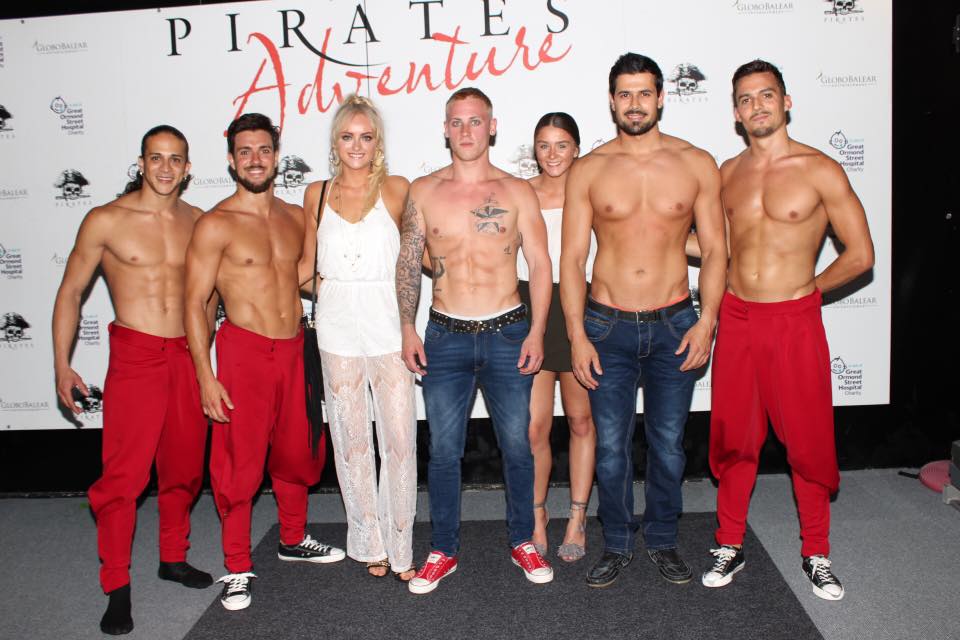 Brooke Vincent poses for a photo after the show

Formally the actress playing the dramatic character of Sophie Webster, Brooke clearly likes entertainment with lots of twists and turns. 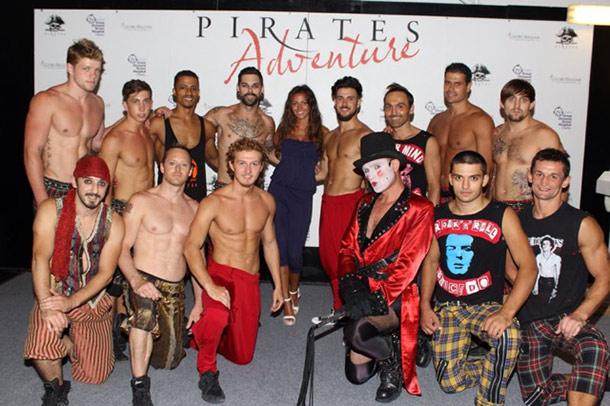 Born and bred in Manchester, Michelle Keegan rose to fame in her role as Tina McIntyre in Coronation Street between 2008 and 2014 before moving on to act in several other TV shows. She is now a socialite well in the public eye.

THE ONLY WAY IS ESSEX CELEBS 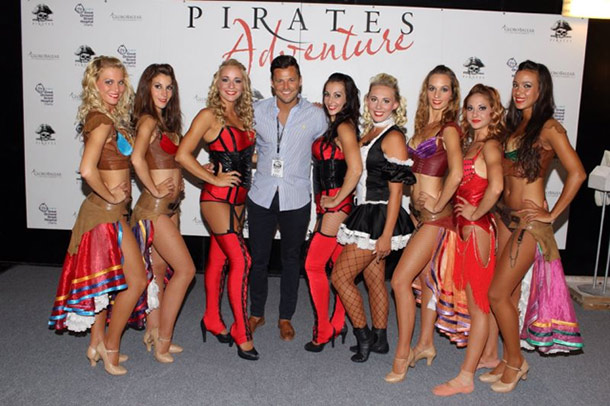 Michelle Keegan’s hubby also attended the show. Although a youth footballer in his younger days, Wright became a household name following his stint in the hit reality TV show “TOWIE”. Now a familiar face on our living room screens, he has appeared in programmes such as Strictly Come Dancing, I’m a Celebrity… and Take Me Out. 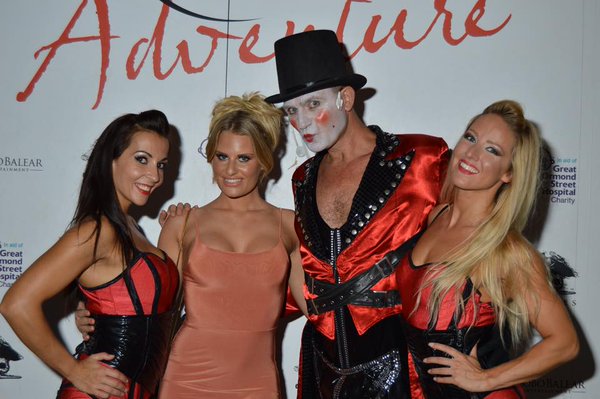 Another reality TV star, Dani is in the current series of TOWIE and also has her own fashion label selling dresses, playsuits and other fashionable items – some which Danielle has been seen wearing herself. 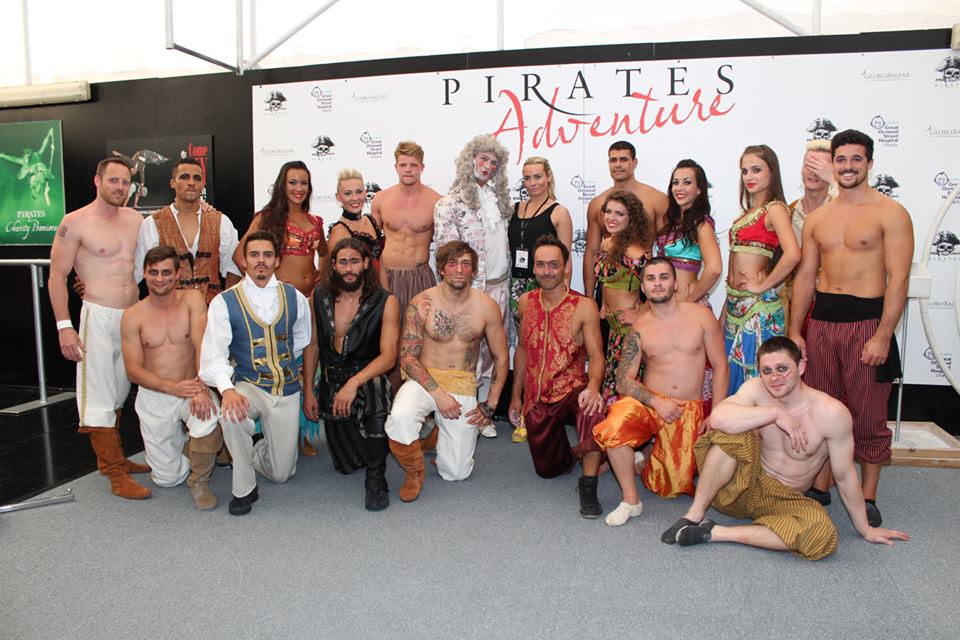 Seen in a spin-off of the award-winning American TV series Desperate Housewives, Amanda Harrington is another socialite within the public eye. 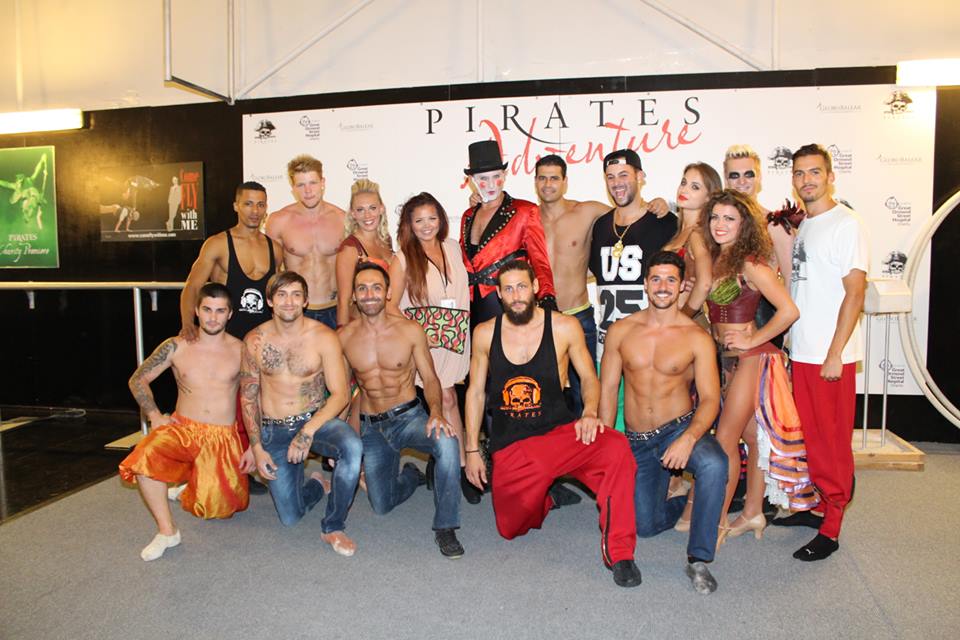 Are you a Gogglebox fan? You may be used to watching Scarlett Moffat watching other people on telly, but this time, she’s the one that’s been spotted watching Pirates Reloaded!

It’s safe to say that Pirates Reloaded is an un-missable adults-only show… Visit this link and use the promo code OTB15 to redeem 15% off on tickets to all On the Beach customers.